You’re in search of the best sippy cup in the sea of sippy cups…anyone who does a quick Google search will quickly find the overwhelming options out there with a whole slew of styles of cups. But how do you know what the best sippy cup option is? We know this is new territory for you, so we’re breaking down what exactly you should be looking for in a sippy cup at every age. No longer do you need to hit add to cart on every option and pray that your thirsty tot will drink from one of the eight cups you’re about to purchase–you’ll be a sippy cup connoisseur by the end of this!

Can you believe it? Your baby is already 4 months old and starting solids, which means you’re allowed to introduce water with a meal.* Since babies this age are only used to being bottle or breastfed, a sippy cup can be confusing for them at first. From ages 4-6 months it’s ideal to introduce a transitional cup. These cups are made with features that are similar to a bottle but offer small changes that mimic a full training cup like handles and a soft spout.

*Please consult your doctor before providing your baby with anything other than breastmilk or formula.

Once baby hits their half-birthday mark you’re officially in solids and sippies territory. This is where we find parents struggling the most with finding the right fit for a sippy cup. Here are a few easy criteria to follow:

Spout vs Straw vs Spoutless

This can be the most confusing part about a sippy cup…they practically have their own jargon. Below we break down the difference between each.

A spouted trainer cup is typically made from a harder plastic and is shaped similar to a nipple, but is narrower. You’ll notice labels like “bite-proof” spout on these since early learners are often teething and might love to nibble little holes in their new-found cup.

The name is exactly what it means, it’s a trainer cup with a straw. A straw can be challenging for very new users of a trainer since it is the most narrow option for an opening and is an entirely new way of drinking. You might want to introduce this type of cup once baby has conquered holding and drinking from a spouted top. A weighted straw cup is a good starting option, since baby may always feel inclined to tilt when drinking–this guarantees they’ll get liquid from any angle.

A fan favorite of dentists, this 360° rimmed cup has no spouts or straws, only a sealed lip that lets liquid out when sucked, but never leaks. It will take some trial and error (and patience) on your part when teaching baby how to use, but is loved by parents the most for its leak-proof guarantee and ease of use as baby grows.

Congrats! You’ve made it one whole year, your baby is now officially a toddler, and is starting to work on transitioning from bottles and breastfeeding to exclusively using a sippy cup for milk! As you take on this new milestone it means your toddler is also ready for a “big kid” cup. Graduating from using handles, their fine motor skills can handle gripping a larger cup with no extra help. They’re also ready to use a more advanced method of drinking. Similar to the options in 6-12 months, the type of cup you choose comes down to the child.  Toddlers may prefer to move on from a spouted cup to a spoutless or straw because it’s easy for them to master at this age but all are still an option. Cup sizes are also larger, offering more capacity for milk and water.

Just like the spout your little one may have used earlier, this is still a great option. If you’re both happy with a spouted sippy cup you can stick with this style! This version bumps up the amount of liquid it can hold and eliminates handles. Pro Tip: This style of cup is recommended for ages 9+ months so it’s okay to introduce it sooner.

Similar to what we described in 6-12 months about straws, this cup ditches the handles and offers a higher capacity for liquids. At 12 months and up, using a straw is a simple task and your toddler may prefer this cup since they can drink faster, plus it’s still soft on their gums.

If you didn’t introduce this style of cup before 12 months you might find you prefer this style best (it’s our #1 selling cup) for its dentist recommended design and 360-degree drinking edge that allows kids to drink from any side. Available in multiple sizes and materials, it’s a timeless cup that your kids can use well into early adolescence.

Truly a big-kid cup, this straw cup functions much like a cup any adult would use. Still using a silicone straw, this cup requires discipline in knowing to hold it upright when in use. Kids will love getting to drink from a cup like you, and have their snacks and drink all in one convenient place–there’s a snack catcher built into the lid!

The “let me do it myself ” phase is in full effect at this age and it’s highly likely your keen toddler wants to also drink just like mom and dad. The thought of introducing a real cup might sound like spills waiting to happen because even though your almost two-year-old CAN hold the cup, it doesn’t mean they can hang onto it all the time. A “trainer” cup offers your toddler the satisfaction of drinking like a big kid, and you the peace of mind that lots of spills aren’t in your future. The removable lid makes this cups a great multi-stage solution too for when your toddler is ready to graduate with an open cup option.

Need a personal recommendation for a cup? Tweet us @munchkin_inc or leave a comment below with all your cup questions! 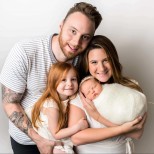 Melissa has been writing for 10 years about a little bit of everything. For work, she manages all things content at Munchkin, but her real boss in life are her two red-headed daughters ages 6 months and 4 years.